Bicycles are considered vehicles in Georgia. Therefore, they are subject to state traffic laws. In addition, several laws apply specifically to bicycles.

Following traffic laws can reduce the risk of a bicycle accident. Let’s discuss some of the bicycle laws that help keep riders safe. 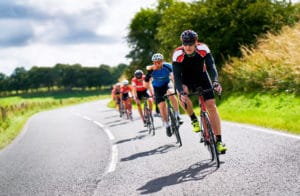 Drivers in Georgia were required to give bicyclists at least three feet of distance when passing a bicycle. However, amendments to O.C.G.A. §40-6-56 require drivers to slow down and give bicyclists more room.

Drivers are now required to change lanes if traffic conditions permit. If the driver cannot change lanes, they must reduce the speed of their vehicle to ten miles below the posted speed limit or 25 miles per hour, whichever is greater, when passing a cyclist. In addition, the driver must give the bicyclist at least three feet of clearance when passing.

2.  Manner of Riding a Bicycle

3.  Transporting Children on a Bicycle Children between the ages of one and four years cannot ride as a passenger on a bicycle unless the child is securely seated in a child passenger bicycle seat, an infant sling, or a bicycle trailer. The devices must be used in accordance with the manufacturer’s instructions.

4.  Carrying Articles While Riding a Bicycle

Carrying bundles, packages, or other objects while operating a bicycle is prohibited if it prevents the rider from keeping at least one hand on the handlebars.

5.  Use of Lights on a Bicycle 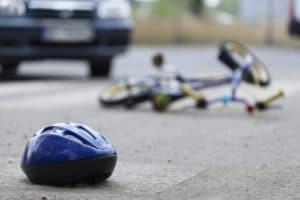 All persons 16 years of age and younger must wear a bicycle helmet when riding a bicycle.

A “bicycle helmet” means protective headgear that meets or exceeds the standards for bicycle helmets set by the American National Standards Institute or the Snell Memorial Foundation.

7.  Where Can Bicyclists Ride?

Bicycles are required to ride as near the right portion of the road as safely possible, except when traveling the speed limit or passing a vehicle.

Bicycle lanes are for the exclusive use of bicycles. Bicyclists over the age of 12 years cannot ride on sidewalks unless a local ordinance allows for bicycles on sidewalks.

Bicyclists cannot ride more than two cycles side-by-side except on paths or roads designed for the exclusive use of bicycles. Except when the traffic law conflicts with a specific bicycle law, bicyclists must follow traffic laws. They must stop at all red lights and stop signs. Riders must use hand signals when turning or coming to a stop.10. Requirement for Brakes

All bicycles must be equipped with a brake that allows the rider to make braked wheels skid on level, dry, clean pavement. A uniformed police officer may stop and inspect a bicycle to ensure it meets this requirement and other equipment requirements. In 2019, 846 bicyclists lost their lives in traffic crashes nationwide. In addition, thousands of riders are injured in crashes with motor vehicles.

Bicyclists can take steps to protect themselves when riding a bicycle in Atlanta.

If you are involved in a bicycle crash, call 911 to report the crash. Seek immediate medical treatment for your injuries and document the damages if you need to file an injury claim. You can also consult an Atlanta bicycle accident lawyer to determine your options for recovering compensation after your crash.